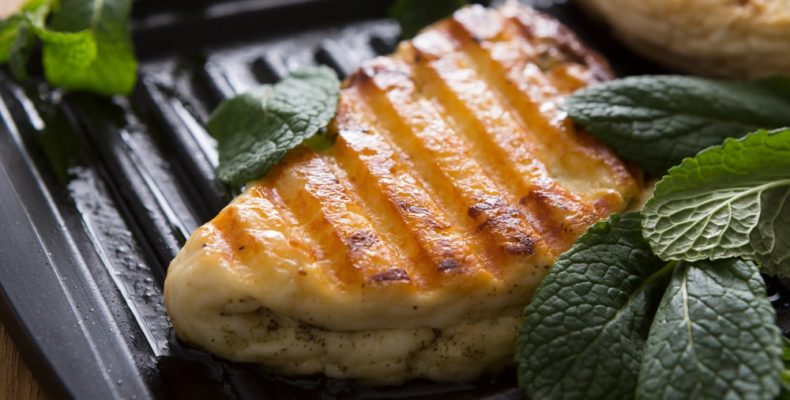 Just a decade ago, Cypriot halloumi cheese was considered a niche food, but since then its popularity has soared throughout the UK and Europe, so that today it has been reported the British consume more halloumi than any other country outside Cyprus.

However, the ‘squeaky’ cheese hasn’t been quite as successful in preventing the registration of a figurative trade mark which features the word BBQLOUMI and a plate of food containing grilled cheese placed on a picturesque scene, for goods in Classes 29, 30 and 43 (including cheese), filed by Bulgarian company M.J. DAIRIES EOOD.

The Foundation for the Protection of the Traditional Cheese of Cyprus, named Halloumi (‘The Foundation’), opposed the BBQLOUMI application back in 2014, relying upon an EU collective trade mark for HALLOUMI which is registered for cheese. Collective trade marks differ from traditional trade marks, because they indicate goods or services originate from a trade association, as opposed to one single commercial source.

Although HALLOUMI is not a traditional trade mark, the requirements for basing an opposition on the same are no different from opposing on the basis of a ‘regular’ trade mark. It must be shown that there is a likelihood of confusion arising between HALLOUMI and the BBQLOUMI mark or that use of the BBQLOUMI mark could damage the reputation of HALLOUMI or take unfair advantage of the same.

The Foundation’s opposition against the BBQLOUMI mark was dismissed by the European Union Intellectual Property Office (EUIPO) on the grounds there was no likelihood of confusion. In making this decision, the EUIPO formed the view that HALLOUMI has weak distinctive character because it is the name of a well-known cheese. The EUIPO’s decision was upheld on appeal to the EUIPO Board of Appeal and then on appeal to the European Union General Court (the General Court).

On a third appeal to the Court of Justice of the European Union (CJEU), the CJEU observed that the General Court had relied on the incorrect assumption that, when an earlier mark has weak distinctive character, the finding of a likelihood of confusion should be precluded as soon as it is established that the similarity of the marks, when assessed independently, does not permit such a likelihood to be established. The CJEU confirmed that weak distinctiveness of an earlier mark does not automatically rule out the existence of a likelihood of confusion and for this reason, the CJEU decided to send the case back to the General Court, setting aside its initial judgement.

In correctly assessing the similarity between the goods before the similarity between the marks, the General Court found no likelihood of confusion in respect of ‘meat extracts’ and ‘catering services’ covered by BBQLOUMI’s application, as they are dissimilar to cheese. In contrast, the General Court found similarity to varying degrees between the rest of the goods covered by BBQLOUMI’s application (namely: dairy products and dairy substitutes; cheese; processed cheese; cheese products; cheese dips; prepared dishes consisting wholly or substantially wholly of meat or dairy products; sandwiches; crackers flavoured with cheese; condiments; sauces; cheese sauce; foodstuffs made from cereals).

In assessing the similarity between the marks, the General Court stated: “the marks share the element ‘loumi’, which has weak inherent distinctiveness for a large part of the relevant public who will understand it as a possible reference to halloumi cheese. Given the attention of the relevant public will be drawn more to the initial part of that word element, namely ‘bbq’, owing to its position, rather than to the final part ‘loumi’, that latter part contributes very little to the distinctiveness of the mark applied for”.

Furthermore, the General Court commented the figurative element of the BBQLOUMI mark differentiates the mark from HALLOUMI, since HALLOUMI is a word mark and the “figurative element relates more to the concept of ‘barbecue’ than that of ‘cheese produced in a Mediterranean environment’, since it is not possible to state categorically that the foods represented are pieces of halloumi cheese”.

HALLOUMI is currently going through the application process to be registered as a protected designation of origin (PDO). If the mark successfully registers as a PDO, chances of success in opposing applications like BBQLOUMI will be much higher. This is because a PDO can be enforced more widely than an ordinary trade mark registration, to prevent any misuse, imitation or even evocation. There is no requirement to prove a likelihood of confusion and as such, a third party could be found to ‘evoke’ a PDO without using a name which is similar to the registered trade mark.

Lessons to be learnt from the BBQLOUMI dispute

This case illustrates the added strength of inherent distinctiveness in protecting a trade mark from other similar registrations and the importance of obtaining PDO protection.

If you would like to discuss this article further, or any other trade mark matter, then please do not hesitate to contact the author, or your usual Barker Brettell trade mark attorney.