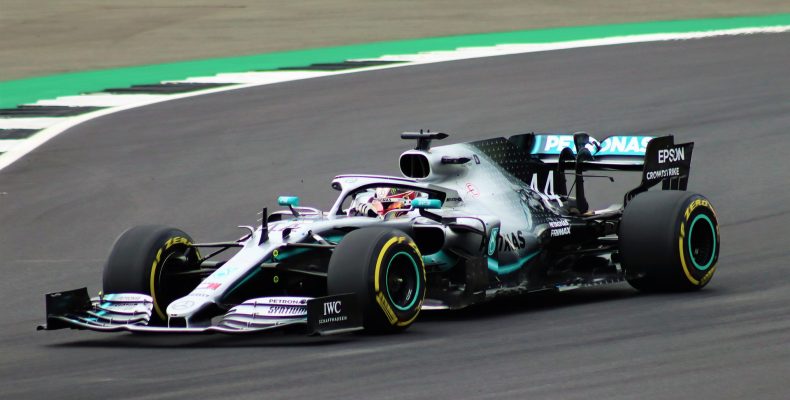 DAS is good? Why ‘trombone steering’ has got racing in a spin.

In February this year, at pre-season testing, the Mercedes AMG team took the Formula 1 paddock by surprise when its drivers were spotted pulling their steering wheels towards them at speeds of over 200mph. This so called ‘trombone steering’ was later confirmed by Chief Technical Director James Allison to be a system called Dual Axis Steering, or DAS. So just how does this innovation work?

While at a glance, the front wheels of a Formula 1 car may appear to be facing straight forwards, they are in fact usually pointing slightly away from each other in a set up known as ‘toed-out’. Under braking forces, the tyres are pushed slightly inwards, so since they were toed out to start with, they straighten up under braking. This means that once they get to the corner they were braking for, the driver has the grip and stability when they most need it. If the wheels were to begin straight, they would toe-in under braking, a much less stable set up for cornering. Of course, toed out front wheels are not optimum on the straights, the tyres scrub slightly which negatively impacts top speed and increases tyre wear. The teams therefore have to choose a toe angle which represents the best compromise between speed on the straights and stability in the corners.

The advantage of the DAS system is the ability to change the toe angle in the car. While the turning of the steering wheel operates the front wheels in the usual way, the pulling and pushing of the steering wheel allows the drivers to change the toe angle, straightening the wheels up on the straights, and toeing them out just before braking for stability in the corners. Mercedes therefore seems to have innovated around the need for compromise. Unfortunately, like many F1 innovations (Mclaren’s F-duct, Brabham’s Fan Car, and Brawn’s Double Diffuser spring to mind) DAS has been banned for next season, and with the first nine races of the 2020 season postponed indefinitely, the worry is that we may never get to see how much DAS really helps the Mercs in a race.

So without race data to dive in to, let’s look back at some other steps which drove steering technology forward. It’s time for a history lesson:

I have the power

Almost 100 years ago, a truck engineer named Francis W. Davis began exploring how the steering of increasingly heavy trucks could be made easier. In 1927 he filed for Patent No. US1874246, which detailed the first practical1 power steering system. He later moved to General Motors and refined the hydraulic assisted power steering system, filing a number of subsequent patents. The system uses a hydraulic pump powered by a belt attached to the engine to pressurise the hydraulic fluid. The fluid moves a power ram, and a control valve dictates how much hydraulic pressure is needed to move the wheels depending on the amount of input at the steering wheel. The hydraulics essentially amplifies the driver’s inputs, reducing the amount of effort needed to operate the vehicle.

Unfortunately, as the great depression hit, GM decided that the system would be too expensive to produce commercially, and it was not until 1951 that Chrysler introduced the Chrysler Imperial, the first commercially available passenger car with power steering. The Chrysler system was based largely on some of Davis’ expired patents.

Hydraulic power steering systems are still in widespread use, but despite a debut on the underwhelming and underselling 1988 Suzuki Cervo, electric power steering is taking over. Hydraulic systems have been all but perfected, but downsides remain. The hydraulic pump is driven by a belt connected to the engine. This is a parasitic loss since the hydraulic pump constantly takes power from the drivetrain. By contrast, electric systems replace the pump with an electric motor and so have no need for a constantly running pump. The motor only takes power when it is needed, resulting in a marked increase in efficiency. Chevrolet claim to have seen a 2.5 per cent increase in fuel economy since switching to electric power steering, while Honda claim 3 per cent to 5 per cent.

Other advantages of electric power steering come in the form of adjustability and future proofing. The adjustability of the torque provided by the electric steering motor allows the set-up of different steering modes such as a ‘city’ mode with more assistance for feather-light steering, or a ‘sport’ mode with less assistance for a heavier and more connected feel. Meanwhile, on the future proofing front, electric systems integrate nicely with Radar guided automated parking, and with the surge towards automation, hydraulic steering’s days are definitely numbered.

Four is better than two

Enter active four-wheel steering. In 1985, Nissan introduced the first production active four wheel steering system to the R31 Skyline. At low speeds, the rear wheels turn in the opposite direction to the front wheels. This significantly reduces the turning circle of a car and is of particular use when parking, or negotiating tight bends. As you might imagine however, such a tight steering response would have destabilising and potentially catastrophic effects at high speeds. As a result, at high speeds, the rear wheels turn in the same direction as the front wheels. This leads to a slight crabbing effect resulting in a more stable and predictable response when making high speed manoeuvres such as changing lanes. The increased production cost of a car with active four wheel steering means that for now the systems are primarily found on premium and high performance models, only time will tell if this innovation will filter down the price spectrum.

The steering story once again highlights the importance of protecting your IP, particularly in the automotive sector. Whilst GM did not directly capitalise on the Davis patents, the patent protection did prevent competitors like Chrysler from introducing their own systems based on Davis’ work for over 20 years. Further, whilst technologies such as electric steering and four wheel steering were introduced over 30 years ago, manufacturers continue to file patents for developments to these systems, such as Patent application No. US2020102004A1, describing a four wheel steering system which works in conjunction with individual control of the front and rear brakes. This application was filed by Honda and published in April 2020. It is clear therefore that in a forward looking sector where innovation is king, there is no room for complacency in your IP protection strategy.

So are we likely to see DAS on a model rolling off the forecourt anytime soon? To be honest, it’s pretty unlikely. The marginal gains that racing innovations like DAS are chasing, are quite simply unimportant to the average road user, and with trends increasingly going the way of giving drivers less to do, if I pull on my steering wheel and it moves any time soon, it’s probably just time to call the mechanic.

1The first patent for a power steering system was granted in 1876 to a man named G. W. Fitts.

With the first nine races of the 2020 season postponed indefinitely, the worry is that we may never get to see how much DAS really helps.