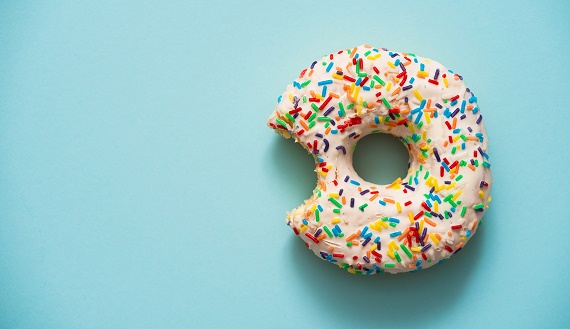 The disappearance of blue Smarties® was a hammer blow that echoed through the mid-noughties. Nestlé®, reacting to fears that artificial colourants were causing hyperactivity in children and may pose other health risks, revamped its Smarties® range to remove all artificial colourings. Tragically, a suitable replacement for the brilliant blue (E133) colouring could not be found and blue Smarties® were, for a time, retired.

This episode demonstrated a long-standing trend in the food industry to move away from the synthetic – colourants and ingredients in general – towards the naturally sourced and organic, often on health and sustainability grounds.

The loss experienced by millions of British children was intense, yet mercifully short lived. In 2008 Nestlé® announced that a replacement had been found and that blue Smarties® would be returning to the hexagonal tube (changed from the round tubes in another paradigm shifting moment at the start of the millennium). The replacement was spirulina, extracted from blue green algae.

Since then, the pressure to replace synthetic colourings with natural alternatives has remained, but progress has been slowed down by technical issues related to natural dyes.

Natural dyes often suffer from a lack of intensity compared to their synthetic cousins, and often have shelf lives that are too short for the food industry. For those dyes originating from vegetables grown in the field, there is the unpredictability of supply and quality due to environmental conditions. Beyond that, there is the uncomfortable thought that to produce a kilo of red dye, a square kilometre of beetroot needs to be cultivated.

Seeking to address the first issue, Danish company GNT has recently released, under the Exberry® brand name, a range of blue and adjacent colour food dyes derived from spirulina that have intensities to rival those of their synthetic counter parts, and which are water soluble.

Mars Inc. faced a similar problem to Nestlé® in removing natural blue colours from their M&M® product. Partnering with Ohio State University, they were granted a patent for a new method of producing a vibrant blue dye from red cabbage and sweet potato. The method utilised an ion exchange column under controlled pH conditions to isolate the dyes with a maximum absorbance of 615 to 635 nm.

Both of these developments provide a natural dye with an intensity that could return the blue Smartie® to its former, electric glory.

Developments are not just limited to blue dyes. A team from Cornell University, led by Alireza Abbaspourrad, have been working on improving the shelf life of dyes to make them suitable for use in the food industry. They found that by exposing a formulation of beetroot extract, locust bean gum and sodium alginate – or gum Arabic – to extremely high pressure, the pigment from beetroot extract is made temperature stable and remains in this state for up to six weeks.

Red food dyes are typically derived from vegetables such as beetroot or purple carrots; or insects such as cochineal. However, Chromologics is moving the industry away from these sources with the development of a fungal platform for the productions of food dyes using fermentation. Through the fermentation of Talaromyces atroroseus, they can reliably produce one kilo of the group of red pigments known as atrorosins from the equivalent of ten square metres of farmland.

It is important to note that the dyes utilised in these developments are already known, being products occurring in nature. But the novel methods of formulating or producing the dyes are a new intellectual contribution and therefore are suitable for patent protection.

Through advancements such as those above, there is a hope that food producers will have fewer occasions on which they have to choose between the unique look of their product and the demands on their consumers. If you would like to discuss the subject of this article in more detail, then please contact the author, or your usual Barker Brettell patent attorney.

The novel methods of formulating or producing natural dyes are a new intellectual contribution and therefore suitable for patent protection.